The oil and water separation is a very sensible issue nowadays.

City’s parking, as well as factories and commercial centres ones, oil stations and many other activities produce a very concentrated source of pollutant oil that can not flow in the civil drainage systems.

The traditional static systems occupy big volumes and require large excavations, as the water flow that carry the oil can be very substantial and the retention time of these basins is very long.

water): this allows to realize smaller and cost effective systems.

The Onda coalescing media consists of pre-assembled thermoformed sheets with 60° inclined channels. These channels choke the flow, creating a less turbulent flow. The flow is confined in each channel, so the oil droplets have to travel a smaller vertical path than in conventional systems; in other words, droplets rise vertically along the height of the channel instead of the entire liquid pool height.

This increase the separation rate of water and oil. The droplets accumulate themselves along the ceilings of the channels, which have a corrugated surface and are made of PVC, which is an oleophillic material.

The oil droplets size increase: this is when coalescence occurs. As demonstrated by Stocke’s Law larger oil droplets rise to the surface faster.

The following drawing shows the coalescence phenomena and the advantage of using Onda coalescing media. 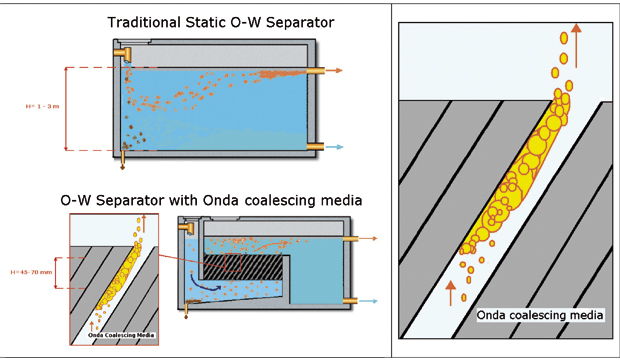 Typical layout of a metal vessel coalescer and Onda Coalescing media cut to size for such a vessel. 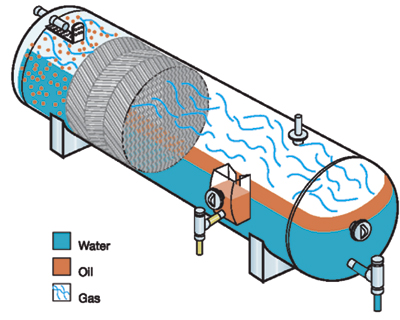 EUROFILL is on the market since 1975.
Thanks to the experience of its management and the expertise of its engineers, the company has quickly become a reference point in Italy and Europe in the production and distribution of products and solutions for the market energy and air and water treatment.