Aerobic treatment processes are used for the removal from waste water of organic carbonaceous material and nitrification.
The most common system for the growth of the treatment organism on a supporting surface is the so-called "Trickling filter", comprising a bed of highly permeable material to which the micro-organisms are attached and through which the water for treatment percolates from the top, where it is distributed by spray branches, to the base. The filtration material on which the micro-organisms grow can be of rock or a packing of preformed PVC sheets in modules. The synthetic fill pack is normally employed for trickling filters with high flowrate and high biological load.
Underneath the packing the bottom-drain receives the treated water plus those biological solids which break away from the supporting surface. It also serves as a porous structure through which air can circulate, often by natural convection. The recovered liquid passes into a sedimentation tank where the solids separate from the treated water.

Whilst all the biological sludge is passed from this tank to a suitable treatment unit, a part of the existing treated liquid is recycled to dilute the entering water and to humidify the biological slime layer.
The organic material in the water to be treated is broken-down by the micro-organisms present on the surface of the fill. The organic matter present in the water is absorbed on to the biological layer, in the outer part of which the decomposition is performed by aerobic organisms. During the growth of the micro-organisms, the thickness of the biological layer increases and the oxygen diffusing through it is consumed before it reaches the bottom of this layer which becomes an anaerobic zone. The absorbed organic material is metabolised before reaching the organisms at the support surface: they pass into a phase of endogenous growth and are no longer able to adher to the fill. The water then removes them from the support surface and the growth of a new layer is initiated. This phenomenon depends upon the organic and the hydraulic loading, usually controlled to maintain a uniform biological slime layer. 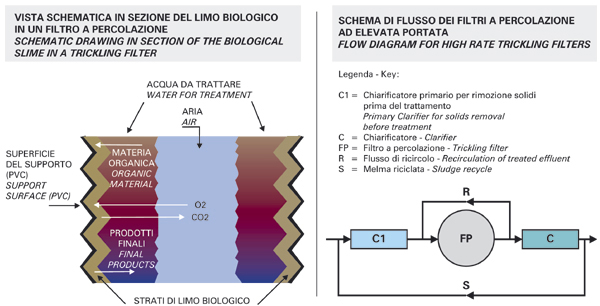 The EUROFILL product range synthetic fill is composed of high quality corrugated PVC sheets: these are assembled with the direction of the corrugations inverted every other sheet and glued together to form modules, typically 1200 x 600 x 600 mm. For high rate trickling filters the wave or corrugation is in 27 mm with a specific surface of 100 m2/m3.
The corrugations improve the growth of the biological slime and the retention time . The indentation in the sheet surfaces, originally designed for the structural reinforcement of the fill, is also advantageous for the biological slime formation. It is thanks to the lesser tendency to blockage of these fill modules (97% voidage), compared to more traditional fill types (50 - 60% voidage), that they have been increasingly employed for high rate trickling filters. For the 27 mm wave (BIO 27), the sheet thicknesses available are 500, 600 and 700 µm with the possibility where necessary of insertion of additional flat sheet for module reinforcement. Additionally the blocks can be supplied wt to size to facilitate their installation in the trickling filter


Certain applications, such as the upgrading of rock-filled trickling filters, can make use of our synthetic fill to obtain a greater surface to volume ratio.
For low load applications (mini systems) and for nitrification applications where the biological layer is much thinner, the model BIO 13 and BIO 20 fill can be employed, increasing the available growth surface per unit volume of biofilter.

EUROFILL is on the market since 1975.
Thanks to the experience of its management and the expertise of its engineers, the company has quickly become a reference point in Italy and Europe in the production and distribution of products and solutions for the market energy and air and water treatment.